A snakeboard (also called streetboard, or "pivotboard") is a board that was invented in 1989 by James Fisher and Oliver Macleod Smith. It evolved from the original skateboard, and brought with it elements of snowboards and surfboards. The original version was built utilising square wooden boards, an old roller skate and a piece of plumbing pipe. Many variants were built before manufacturing trucks from plastic. Wheels are attached to the footplates via a form of "truck", as they are with regular skateboards. 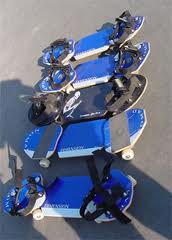 The rider of a snakeboard stands with one foot on each footplate, the feet are usually fixed to the board using bindings, and by moving his/her feet in and out in conjunction with the shoulders and hips- the rider is able to propel the board in any direction using only body weight. This transfer of energy is called non-holonomic locomotion. The board moves in a motion similar to that of a snake, hence the sports original name of snakeboarding. The rider of a snakeboard can ride the board on almost any terrain (depending on the set-up and model of board) and even propel themselves up-hill and perform extreme stunts similar to those done by skateboarders and snowboarders. Snakeboards allow the rider to gain momentum without the need to push themselves with their feet like skateboarders.

Quoted directly from the Snakeboard patent Abstract and Claims: "This invention relates to a skateboard comprising two footboards each of the footboards including a foot platform and wheel-set which carries two wheels in axial alignment fixed to the underside of the platform, a spacer element for holding the footboards in a spaced relationship and a pivot arrangement having a vertical pivot axis connecting each footboard to the spacer element to enable both footboards to pivot relatively to the spacer element, each wheel set including a wheel body, wheel axles which are fixed to and project from the opposite sides of the body with the wheels being journaled for rotation on the axles, a first pivot pin being attached to the wheel body with its axis in a vertical direction, a support member on the wheel body, a second pivot pin pivotally connecting the foot platform to the support member with its pivot axis normal to the wheel axis, and resilient suspension means between the support member and the underside of the foot platform for holding the platform horizontal, said pivot arrangement being pivotally engaged with the first pivot pin." 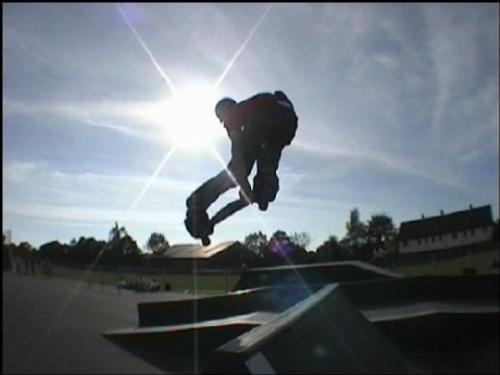 Skatex International (Pty) Ltd is the name of the first company that manufactured boards of this kind and was the inventors original company. Skatex International licensed Snakeboard USA to sell and distribute the boards in the United States; the sport rapidly became known as "snakeboarding". James Fisher, Simon King and Oliver Macleod Smith jointly owned the patents and trademarks to the sport. In the late 1990s, the inventors licensed PMS (UK), a toy retailer, to manufacturer the "Sydewynder" under license. Over 50,000 Sydewynders were sold in the UK and Europe. The inventors then listed their company Snakeboard International AIM market, a division of the London Stock Exchange. Later there was a reverse acquisition of Snakeboard International by a company called MV Sports. MV Sports eventually stopped manufacturing the Snakeboard. However, the sport survives today with more advanced boards, and is becoming more widely known as streetboarding. It has also known as a pivotboard, swingboard and other derivatives. 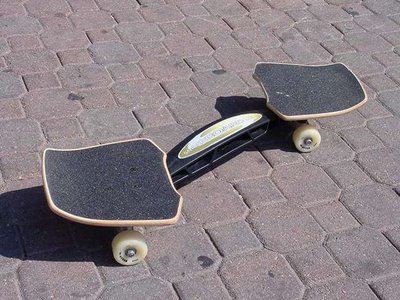 A snakeboard is self-propelled and there is no need to touch a foot on the ground. Moreover, it is considerably easier to generate and maintain momentum than on a skateboard. To perform a trick, one's feet must be strapped to the board, which make it harder to "bail out" of a trick or dismount. It should also be noted that while the footstraps limit the amount a rider can manipulate the board, they also facilitate certain techniques. Much like a snowboarder, the rider can perform spins and somersaults higher and farther than any skateboarder. At the same time, this means a faster learning curve. While a skateboarder will spend weeks learning the most basic manoeuvres, such as the Ollie, or jump, a streetboarder (snakeboarder) simply has to strap himself to the board, and jump as he would without the board attached.